One thing leads to another

This year’s WWETT Show in Indianapolis, Indiana was my 17th show in 18 years and I tell people all of the time that it is my favorite industry trade show.  For 25 years or so WWETT was referred to simply as the Pumper Show (because that was really who it served) – in recent years it was renamed WWETT – for Water & Wastewater, Equipment, Treatment and Transport.

WWETT is the most laid back trade show I have ever attended.  The casual atmosphere is due in large part to the number of family businesses that both attend and exhibit at the show, Hydra-Tech Pumps included.  When I walked into the Pumper Show for the very first time in 1999 in a sport coat, I quickly realized that I was overdressed – overalls or jeans dominate the show floor at WWETT – you won’t see many suits and ties at this show.  It is not unusual to see a group of 5-10 people from a small pumper company with a territory of a county or two come strolling down the aisle.  Many times the group is an entire family and includes kids or grandkids who are enjoying a trade show for the first time (and especially those booths with the candy dishes!).

One of the companies that Hydra-Tech Pumps has had the pleasure of getting to know this year is AA Septic Service Inc. in Clayton, Indiana.  James Penner’s father bought this business in 1984 from another family – more than 32 years later his family business still serves their community in central Indiana some 30 miles west of the Capital.

About 15 years ago James began exploring various septage dewatering equipment for their operation including a belt press, dewatering box, and vacuum pump systems – none of which worked to his satisfaction.  At the time he was still able to cost effectively dispose of his septage.  With the benefit of hindsight, James now says he should have pressed on because slowly but surely throughout the Pumper industry fewer and fewer municipal wastewater treatment plants were accepting septage.  Also increased regulations restricting land application of septage, causing pumpers’ costs for disposal to significantly increase.  James decided that the techniques he had tried weren’t working, so he addressed the problem in true American entrepreneurial fashion – he designed and built a complete dewatering system that would allow him to treat his septage.

After 4 years of developing, refining and testing his concept, he spun his idea off into In The Round Dewatering so that he could market and sell his solution to other pumpers around the country and around the world.  James’ system is a patent pending dewatering drum that is fed from a storage tank and it processes a batch of sludge and polymer of up to 25,000 gallons.

James had one more challenge to overcome – how could he consistently, effectively and efficiently “feed” his dewatering beast when he needed to?  He had access to a digester that was 16’ deep where he could store the septage, mix it into a homogenous fluid, and then pump it to his drum.  The little trash pumps he used previously were inconsistent as the level of the water changed essentially affecting head.  They also had issues with clogging and generally didn’t hold up for very long before needing replaced.  After this year’s WWETT Show James reached out to us to figure out which pump would solve his problems for good.  We hooked him up with an aluminum S3T Hydraulic Submersible Pump – James wrote to me a couple of months later to tell me about his experience since going hydraulic:

“The biggest challenge we have been experiencing during our several years of dewatering has been our ability to pump the liquid waste from the digester to the dewatering drum.  From the beginning, we have used gas powered trash pumps as they are relatively inexpensive. We would scrap them when they quit and buy a new one.  Finally, however, we decided to fix this issue by getting a three-inch submersible hydraulic pump from Hydra-Tech.  The results have been amazing because all we do now is turn on the hydraulic flow and we are pumping.  We no longer have issues priming or dealing with reduced flow when our tank levels get low.  After using Hydra-Tech’s pump for several months, we have not experienced any plugging problems.  The ability to increase the (hydraulic) oil flow and thereby have the pump speed up is more efficient because we are able to fill our In the Round Dewatering drum faster leading to fewer man-hours spent filling the drum. Dewatering has truly become much easier with the addition of this hydraulic submersible pump from Hydra-Tech.  Additionally, the Hydra-Tech pump is light enough to transfer to other tanks making cleaning and emptying them easy. This pump has become a valuable asset to our operation.” 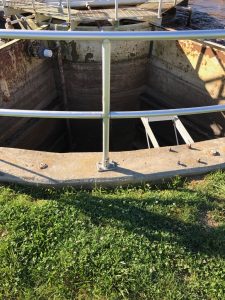 We hope to help more of James’ In The Round Dewatering drum customers efficiently get their wastewater from storage to drum more consistently, with better control, and with a light, reliable and long lasting pump.  If you would like to learn more about James Penner’s serious dewatering drum, check out www.itrdewatering.com.  Our thanks to James for his contributions to this story, as well as for his faith in our product – we are glad it did everything you hoped it would!